Family Guy: The Quest For Stuff

After an "accidental" release to the New Zealand App Store, and an epic hissy fit by FOX, TinyCo's Family Guy: The Quest for Stuff is finally available for mobile devices. The game is another painfully slow resource management title where you must rebuild Quahog after it is destroyed by The Giant Chicken and Peter Griffin. 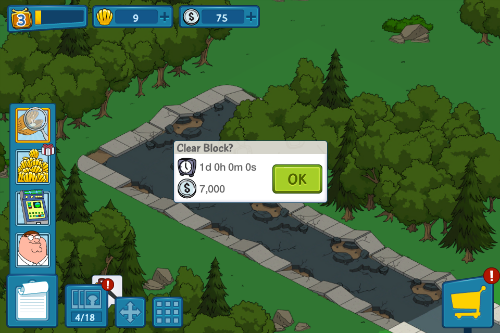 Family Guy: The Quest for Stuff is horribly boring. While TinyCo did a great job of capturing the essence of the television show, the game suffers because all you do is wait around for timers. You can of course speed things up by spending real life cash.

TinyCo's Family Guy game for mobile devices official release date isn't until April 10, but some savvy mobile gamers were able to download it a few days early from the New Zealand App Store. According to TouchArcade, this was a legit download, and no one used any tricks or stole the game, however Fox was not happy when gamers started uploading clips of Family Guy: The Quest for Stuff to YouTube and Twitch.

Fox claims that the game was accidentally made available on the App Store due to a "brief technical error" and began asking YouTube and Twitch users to remove their uploaded footage before sending out copyright claims. A few TouchArcade members' accounts were disabled on Twitch, and all videos featuring Family Guy: The Quest for Stuff were removed from YouTube.