How do I send an invisible ink text on my iPhone?

Update: If the Invisible Ink option does not appear in your Messages app, it is because you have the Reduce Motion slider enabled. Navigate to Settings -> General -> Accessibility -> Reduce Motion, then tap the slider so it is OFF/WHITE.

Update 2: You can only send message effects to someone who has an iOS device running iOS 10 or later. If you have a green arrow instead of a blue arrow this either means the person you're messaging does not have an iOS device, or you have iMessage disabled. You can enable iMessage by navigating to Settings > Messages. Tap the iMessage slider so it is ON/GREEN.

Apple added several new messaging features in iOS 10, such as the ability to send Invisible Ink or animated effects in the Messages app. The Invisible Ink feature allows you to hide your text behind blurry animated pixels. The person receiving the text can read your message by wiping away the invisible ink with their finger to reveal the hidden text. Here's how to send an Invisible Ink text message in iOS 10 or later. 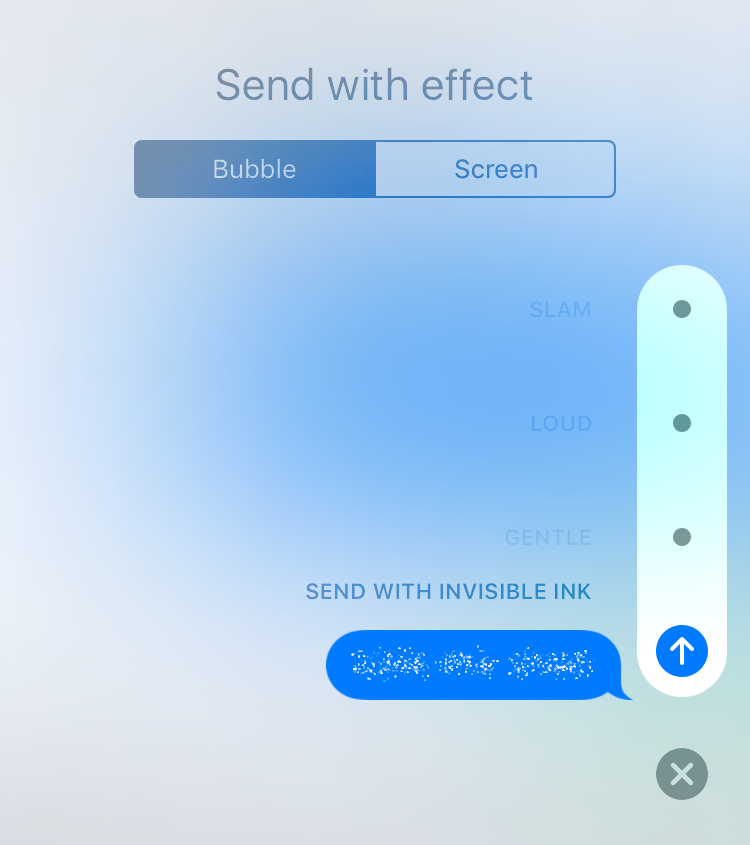 This feature doesn't appear to work on the iOS10 upgrade? Almost broken the screen through pressing the blue arrow! Another Apple failure?

it doesn't work if you have the "reduce motion" set to on in accesssability. Kinda sucks that they have those two things linked together. I like the imessage features but hate all the animation
http://www.imore.com/cant-see-new-imessage-bubble-effects-ios-10-heres-how-fix-it

Reduce Motion is the culprit of "Bubble Effects Not Working". And this issue is only one of iOS 10 problems you may meet, you can refer to: https://www.imobie.com/support/common-ios-10-problems-and-quick-solution... to know more about issues.

Of course, there some other basic methods to fix this effects problem. You can try to restart your device, restore device or reset network settings.

Reduced motion is definitely not the culprit. mine is always off but it doesnt work. i googled and even tried force reboot, making changes to reduced motion, 3d effects, imessage but it doesnt seem to work. even my ios is the latest and no way to update...

This is backwards. Invisible ink only works if the reduce motion is turned off.

My Reduce Motion has never been on yet invisible ink isn't an option for me, WTF.

I've switched my Reduce Motion to off and the invisible ink feature still won't work. Help!

You have to press hard on the screen once your screen goes blurry and it will eventually pop up.

Yes it works on all devices updated to iOS10

1. Turn off that motion thing (you probably already know this one)
2. Still doesn't work? Go to settings > Messages > Send Receive > Click on your AppleID (and write it down if you don't know this email off by heart) > Log OFF > wait 2 mins (I didn't) > log back on (although you can also stay logged off as it doesn't it effect either way now)
3. Enjoy your invisible text (as I'd say the most popular one will be)
4. This worked damn you, so do it :)

Thanks Azr, if one person was helped then I'm happy.
I did forget to mention to sign out of ALL accounts, but mine was just the one :)

thanks! also worked for me

If it doesn't work, you probably don't have iMessage turned on. Go to 'Settings' > 'Messages' > Turn iMessage on.

I have iPhone 6s Plus and the invisible ink is not on my phone half of the features is on my phone.i wonder why iPhone 6s and down have all of these features. Help!!!!