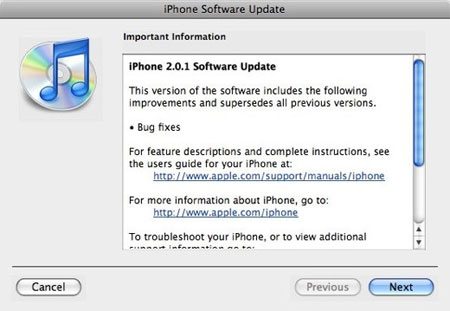 jailbreaks for OS 2.0 seem to have been swept aside as a result of the fact that the vaguely referred to "bug fixes" are actually present and accounted for.

Thus far, the following bug fixes/improvements have been attributed to iPhone OS 2.0.1:

If you have noticed any other changes with firmware 2.0.1, please let others know by posting a comment.

For those of you that have jailbroken/pwned your iPhone running OS 2.0, user feedback has indicated you'll need to wait for the time being if you want your phone to remain jailbroken. The current versions of Pwnage and WinPwn do not work with iPhone OS 2.0.1. Attempts to upgrade jailbroken iPhones running OS 2.0 will result in an error/bricked phone that will require a restore.

Like many people (I think) - I found that the 2.0 version of the software did not sync calendar entries correctly from the iphone to the PC, without making a workaround of setting the item to be recurring and maturing the same day.

I've upgraded the software, and have tested that any entries on my calendar on the iphone do now appear to sync both ways correctly without having to apply any artificial workaround.

Be careful. This upgrade deleted EVERYTHING from my phone and it took me 5 hours and with ZERO help (even though I was on the phone with them) Apple Support to get it back.

They just kept saying. "it shouldn' t have done that" and "how did you get it back?"

iPhones have had their phones bricked, while those who installed third party enhancements