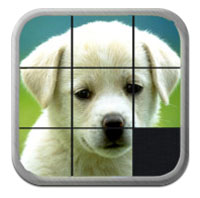 1. Go to settings by touching the circular "i" icon in the lower right corner of the screen.
2. Touch "Count Moves" in the upper left corner of the screen five times.
3. When "Ready Player One" appears in the middle of the screen, touch these words.
4. You are now seeing the GBA/GBC Emulator screen, with a list of installed games.

Of course, Puzzle Slider doesn't come with any games. Game Boy ROMs must be installed from your computer to the iPhone with free file explorer software such as iExplorer. As the emulator explains in the pop-up documentation, the app requires the file "gba_bios.bin" as well as any ROM (game image) files needed to play.

Grab Slider Puzzle from the App Store for $1.99 before it's too late.

i believe this is gone now last i checked...i was gonna get it earlier this afternoon, but had to leave the house. when i came back tonight and checked, it was gone

Downloaded it before they took it off but your instructions on how to access the emulator does not work. I did the whole touch the "count moves" thing 5 times but no luck. Tried it just by pressing the words itself and also my touching the toggle on/off for the count moves icon 5 times as well... nothing works. Maybe I'm missing something but as of now I am upset that I waisted a $1.99. Any suggestions or comments anyone...

funny to me it work and it was free no joke

Nevermind,
Just wasn't pressing it with the wrong timing I guess. It works, awesome. Thanks!!!