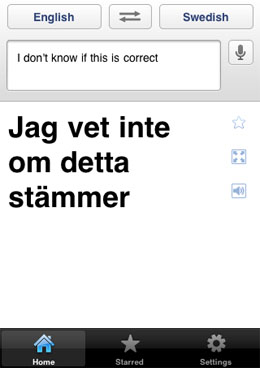 A history of your translations is stored and favorites can be starred to simplify later use. In fact, translations you've already performed don't require an Internet connection to review. Although the zoom capability is an iOS-only feature, the Android version of translate has two additional features that may one day make their way onto the iPhone. One is SMS translation, and the other is Conversation Mode that translates in real time and keeps a history of the translated conversation.

Google Translate has been available as a web app since August 2008, but the web version doesn't have any of the listening or speaking features. When it comes to languages with non-latin alphabets, the native iOS app even supports phonetics. For example, when displaying Chinese characters their associated Pinyin spellings are also listed.

Google Translate is available now on iTunes for free. The app requires iOS 3.0 or later.

SpeechTrans iPhone app uses Nuance and is 95% accurate in Speech Recognition, unlike Google's 60% Speech Recognition Accuracy. If you want to magically be able to speak multiple languages check out www.SpeechTrans.com or search for SpeechTrans on the App store. SpeechTrans also has Facebook Chat Integration so you can speak to people across the world in different languages through Facebook!