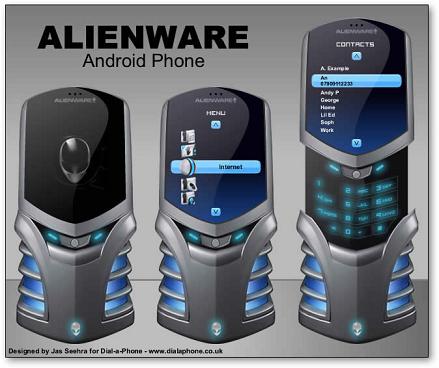 where these rumors came from, as dial-a-phone makes no mention of its source or even whether it has one. Instead, it offers up a few artist mockups (seen above) which they created.

So why is a poorly sourced rumor about yet another Android based phone noteworthy? Well, maybe it isn't. But after seeing that mockup, we couldn't help but wonder -- provided there was any truth to the rumor and that the mockup was based on any resemblance to the real thing -- if Google and Alienware might not be on the cusp of announcing the ugliest smartphone, perhaps ugliest mobile phone, ever created.

We're crossing our fingers that this one is true. A design so tacky and so flawed and just downright hideous actually making it to market would be wonderful. Imagine all the finger pointing we'll all be able to do at the suckers who actually buy it.

Hold your horses i-Unit, that mock up is a horrible Photoshop job...which was intended to be a joke...that doesn't mean the rumor itself will be a joke. Alienware's mp3 players were pretty ugly...but I can't imagine Dell infusing a horrible design if they planned on penetrating the market.