Why Won't Handoff Work With iOS 8 and Yosemite?

Bluetooth 4.0 (BT LE) - Handoff requires Bluetooth 4.0 to be enabled on both devices. You can check what iPhones and iPads have Bluetooth 4.0 here. Most recent Macs should have it, but if you are unsure it's easy to find out:

1. Go to your  menu (top left of your screen) and click "About this Mac."

2. A window pops up showing you your OS X version and some other details. At the bottom of the window is a "System Report" button. Click on it.

3. A new window pops up with a list of options to click on in the left panel. Under "Hardware," click on "Bluetooth." The information in the right panel will change.

4. In the right panel, look for "Handoff Supported." If it says no, you don't have Bluetooth 4.0. For further verification you can scroll down to "LMP Version." If you have Bluetooth 4.0 the LMP version will be "ox6." 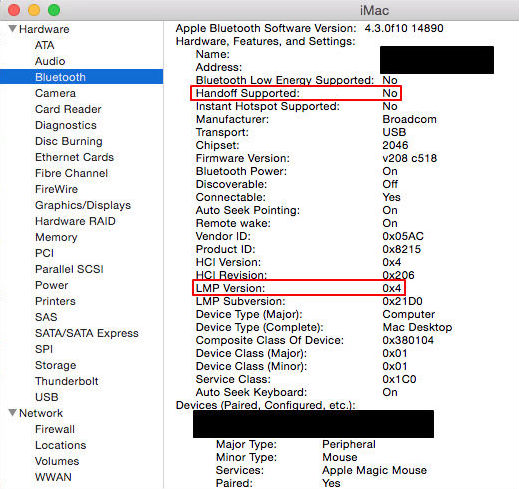 If you have Bluetooth 4.0 you're in good shape. You don't have to pair your devices. Just make sure Bluetooth is enabled on both and make sure they are in range of each other (within about 30 feet). On a side note, if you've been trying to pair and have been frustrated by that, your Mac will only pair with your iPhone if the phone's hotspot is turned on, which will allow your Mac to use your phone's data connection.

iCloud - Both devices need to be signed into iCloud in order to use Handoff. From the iPhone and iPad go to Settings -> iCloud and sign in if you aren't already. From your Mac go to System Preferences -> iCloud to sign in.

Wi-Fi - Both devices need to be connected to the same Wi-Fi network.

Turn on Handoff - A third factor that may have slipped your mind is activating Handoff. On your iPhone or iPad go to Settings -> General -> Handoff & Suggested Apps and use the Handoff toggle to turn it on. On the Mac, go to System Preferences -> General. If you have Bluetooth 4.0 you will see a checkbox near the bottom of the window for "Allow Handoff between this Mac and your iCloud devices." Make sure that is checked off. 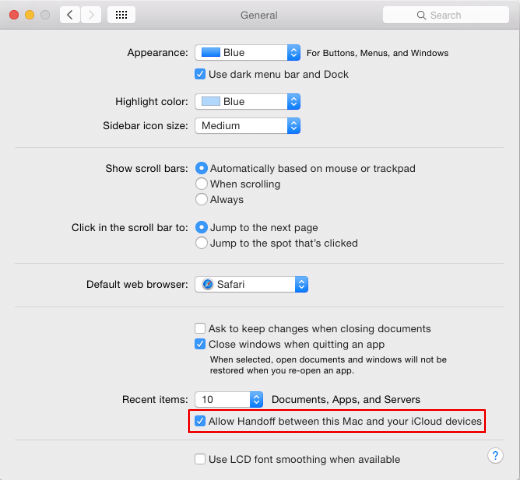 And, as always, it's a good idea to have the latest iOS and OS X versions, as Apple is always fixing various bugs that may have been giving you problems.

Hopefully this clears up a few issues. If not, or if you have more suggestions, let us know.

This filled me with so much hope - and it was so clear and easy to follow - but sadly it doesn't work on my devices (iMac, iPhone and iPad) although all are applicable models and all have Bluetooth 4.

Such a shame - I was really excited about this feature - but yet again something which is problematic and seems only attainable to those who have some techy knowledge...

I neglected to mention that the devices need to be connected to the same Wi-Fi network. Hope that helps. Will update the article.

Hi - yes, all on same Wi-Fi. Have tried everything.

On the iPhone Message settings when I try to activate Text forwarding I am prompted to add a code from my iPhone or iMac respectively - but no code ever appears on either machine.

Arrrghhh...Cannot work out what I am doing wrong!!!

I don't see this Handoff & Suggested Apps in my iPad settings. Do we need a version of iOS higher than 8.1?

If your iPad has Bluetooth 4.0, go to Settings -> General. Handoff & Suggested Apps will be right under Spotlight Search. It's the fifth menu item. If your iPad is 1st or 2nd generation it doesn't have Bluetooth 4.0.

i have a iphone 4gs with iOS 8.1 and there is no "handoff & suggested apps" under the siri and spotlight search options. what do we need for this option to appear?

I finally got it working by logging my iPhone and iPad out of iCloud, then logging back in. At first it didn't work until I realised that only my MacBook was connected to my home's 5G wifi network, whereas my iPad/iPhone were connected to the 2.4Ghz network. Once I switched my iPad and iPhone to the 5G then handoff started working like a charm (so make sure its the exact same wifi network for all devices!). Hope it helps.