Big news in the iPhone jailbreaking world this week. Now that the US government has legalized jailbreaking for smart phone users across the board, Comex has stepped in and released the latest iOS jailbreak solution online. To jailbreak any device running iOS 4 all that's needed is the device itself, no computer required. 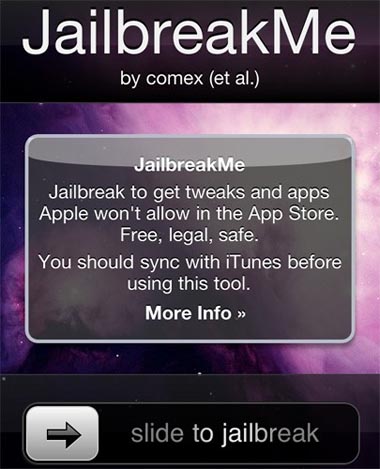 The Dev-Team has announced two sites that will mirror the software, accessible by just visiting these links from your Mobile Safari browser on the iPhone, iPad or iPod touch. The new release is called JailbreakMe 2.0 and can be accessed at jailbreakme.com and jailbreakme.modmyi.com.

PlanetBeing is expected to release the latest unlock solution shortly, which would allow US iPhone 4 users to access cellular networks besides AT&T. Right now the current version of ultrasn0w can be acquired from Cydia and will work on iPhone 3G and iPhone 3GS.

The JailbreakMe web site was swamped today as users clamored to access the new jailbreak. When the jailbreak is finished, a message that Cydia has been added to your home screen appears, then packages can be downloaded and installed through the App Store alternative. Early reports indicate there are some issues with FaceTime and MMS after jailbreaking that need to be fixed.

It remains to be seen if more iPhone owners will join the ranks of millions who have jailbroken their devices in the past, thanks to the new federal ruling legitimizing the process. Jailbreaking is still at your own risk, as it's possible the procedure could make your iPhone inoperable or violate your warranty or terms of service.

The Electronic Frontier Foundation explains, "When one jailbreaks a smartphone in order to make the operating system on that phone interoperable with an independently created application that has not been approved by the maker of the smartphone or the maker of its operating system, the modifications that are made purely for the purpose of such interoperability are fair uses."

Apple has responded to the Library of Congress ruling:

Apple’s goal has always been to insure that our customers have a great experience with their iPhone and we know that jailbreaking can severely degrade the experience. As we’ve said before, the vast majority of customers do not jailbreak their iPhones as this can violate the warranty and can cause the iPhone to become unstable and not work reliably.

What's clear is that the jailbreaking process gets simpler and more convenient with every iOS release, thanks to the hard work of developers like Comex and the iPhone Dev-Team.