If you are a regular reader of iPhoneFAQ then you're probably too smart to fall for a phishing scam, but sometimes these things even fool the best of us. 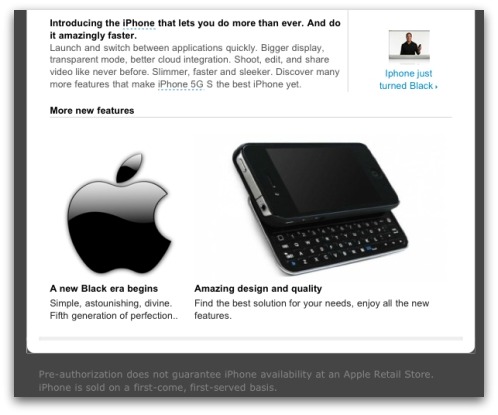 Attackers are preying on the excitement surrounding the WWDC by trying to infect your Windows PC with a nasty Trojan. An e-mail from noreply@apple.com with the subject line, "Finally The amazing iPhone 5. Now available in black edition," promises a bigger and better iPhone 5 with QWERTY keyboard.

"Introducing the iPhone that lets you do more than ever. And do it amazingly faster. Launch and switch between applications quickly. Bigger display, transparent mode, better cloud integration. Shoot, edit, and share video like never before. Slimmer, faster and sleeker. Discover many more features that make iPhone 5G S the best iPhone yet"

Graham Cluley of Sophos.com warns not to click the links inside the e-mail or you may find yourself with a "malicious executable file called iphone5.gif.exe." Cluley identified the malware, "Troj/Zapchast-B" as a Trojan horse. Oddly enough, the virus doesn't infect the Apple users, only Windows operating system.

Even though it's doubtful, the Phishers are hoping to cash in on all the rumors claiming that Apple will announce the new iPhone 5 at the WWDC on Monday. You can expect Steve Jobs to reveal details about iCloud and Lion, the latest version of Mac OS X, but any fifth generation hardware making an appearance is unlikely.