The not-so-friendly iPhone app Ugly Meter has climbed its way to the top of the app charts recently. It's unknown why the face rating app is so popular, but it's currently listed as the third best selling app after Angry Birds Space and Flick Home Run in the iTunes App Store. 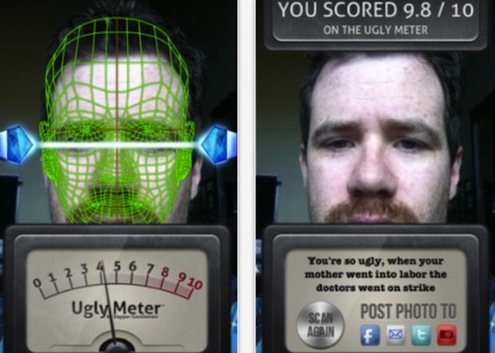 The application scans a persons face before dishing out a 1 to 10 "ugly" rating along with nasty comments like: "Wow you're ugly, is your doctor a vet?". The Daily Mail tested the app's ugly rating ability by using celebrities like Cheryl Cole and Angelina Jolie. Cole scored a 4.2 while Jolie scored a 2.0 along with the positive comment: "You're so hot you make the sun jealous." However, David Cameron (7.0) scored slightly better than Brad Pitt (8.0).

Eugene Overline, one of the creators told the Daily Mail: 'It’s just a game - it’s definitely not meant to be taken seriously." However, some people are concerned that the app will help promote bullying.

The app is available for download for $0.99 in the iTunes App Store. It's compatible with the iPhone, iPod touch and iPad. It requires iOS 3.0 or later

The reason for the spike in popularity is hardly unknown. The developer appeared on the Howard Stern show and other shows on Howard's Sirius channels a few weeks ago. It's been large part of their conversations since.

Thanks for the clarification!