One of the more significant changes that could be coming to the next generation iPhone is a completely redesigned screw. This photo featured on BGR shows a rendering of what is claimed to be an iPhone 5 assembly screw. As you can see, this design leaves no room for at-home repair. 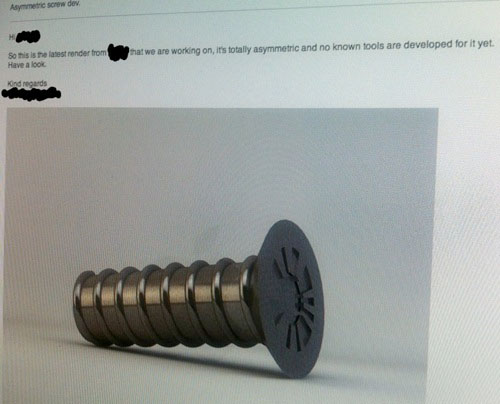 In fact, should this design actually come to fruition, the screw head has no known tools capable of turning the part and loosening the iPhone 5 chassis. The screw is completely asymmetric, unlike any bolt or screw seen before on mobile electronic hardware.

Of course, this leak could be completely fiction. We have no way of knowing until the sixth generation iPhone is actually released in September. Regardless, this wouldn't be the first time Apple sought to come up with a proprietary screw, to lock down their hardware from third-party repair shops and DIY enthusiasts. The Pentalobular screw made a splash when it was first released, but now you can purchase plenty of tools to release this special Apple fastener.

Apple often comes under fire for locking down its firmware and software, known as the walled environment that keeps everyone safe, and presents a challenge to creative developers looking outside the App Store box. The company has also attempted to make its hardware tough to modify and repair, but should the asymmetrical screw make a debut on the iPhone 5, Apple will be truly upping the ante to the next level. One might even ask, why bother with screws at all?

UPDATE: The asymmetrical screw has been confirmed a hoax.