If you've been having problems with the widely reported Do Not Disturb bug, rest assured it will self-fix on Monday January 7, 2013. Apple recommended a simple solution to temporarily fix the problem that has been keeping Do Not Disturb (DND) engaged past a scheduled time. iOS 6 users will have to manually toggle DND mode and disable Settings -> Notifications -> Do Not Disturb -> Scheduled until Monday. 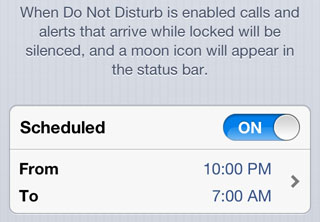 So what caused this week of DND turmoil on iOS devices and prompted an Apple support document on the issue? Turns out that DND uses the ISO week date format, which wanted to compute the first day of the year as January 7. According to Ars Technica Apple even warns third-party developers of the problem, and steers them toward the Gregorian calendar instead.

It's not clear why DND checks the date at all, when the Scheduled function only requires times to determine when to enter and exit DND mode every day. Regardless, users who like the Scheduled DND function have noticed the mode stays engaged when it should automatically kick off.

DND was added to the release of iOS 6, and provides peace and quiet during certain hours or when manually turned on. Exceptions are made for Favorite contacts and if a caller rings twice within three minutes, which could possibly indicate an emergency.

Apple recently launched a new ad featuring DND mode, which shows the iOS user dreaming about being a hotshot ping pong player who beats tennis players Venus and Serena Williams. When DND mode is engaged, sleeping iPhone owners won't be unnecessarily disturbed during moments like these.

The Bug has Been Fixed ...
Wonderful thing done by Apple ...
before jan 7 only
Thnx
Rauf Mir