Sometimes an iPhone jailbreak tweak feels like it should've been a part of iOS all along. This is the case with InfiniDock, which flawlessly adds additional icons to the home screen dock. Infinifolders is no different, allowing iOS users to put as many app icons into a folder as they like. 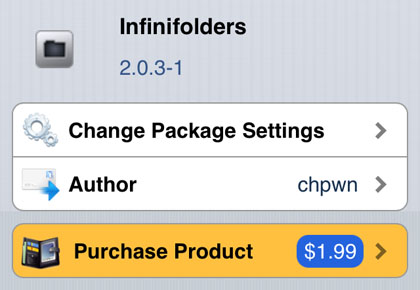 If you haven't noticed, Apple limits the maximum number of icons that can be stored in a folder on the iOS home screen to 16. For those with jailbroken devices, this limit simply does not exist. Infinifolders not only makes it possible to add more icons, but the tweak provides options to customize its behavior.

To add extra icons after Infinifolders is installed, all you need to do is drag them into the folder of your choice. Settings -> Infinifolders will provide access to some customizations, including whether or not you want your infinite folder to scroll continuously or in separate pages. A scroll bar can be turned ON or OFF as well as made white or black depending on your preference. Of course, you can also disable Infinifolders by turning OFF Vertical Scrolling, however any extra icons you've added to the folder will remain hidden.

Infinifolders is available on Cydia from the BigBoss repo for $1.99. Check here for instructions on how to jailbreak iOS 6.x with evasi0n. You can also find out how to purchase and install Cydia tweaks with this guide.