A document has surfaced on the French site NWE that could point to a summer iPhone 5S release. The details are found in an internal carrier publication purportedly circulated to sales staff at the Japanese carrier KDDI. Assuming the document is authentic, Apple will announce the iPhone 5S in June followed by a July release, with pre-orders coming on June 20. 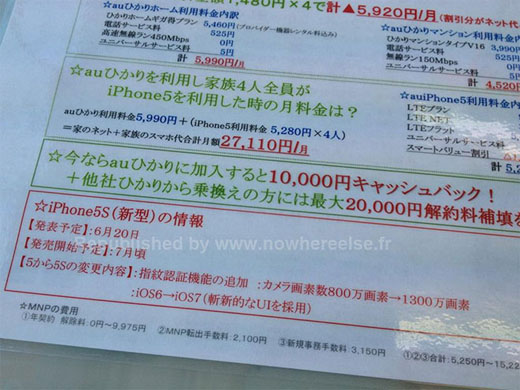 The leaked information doesn't stop there, however. Employees are briefed on the differences between the iPhone 5 and iPhone 5S, with several new features highlighted. The 5S will include a 13 megapixel camera, built-in fingerprint authentication and iOS 7. These items have all been rumored by analysts and from leaks in the component supply chain.

It's possible that if the June 20 date holds up, Apple will reveal the iPhone 5S at the annual Worldwide Developers Conference in San Francisco June 10-14. The keynote would fall one week before pre-orders commence, which matches Apple's release pattern for previous products. Apple CEO Tim cook mentioned several surprises in the works for the company's product line coming in the fall, which could mean that the summer iPhone 5S release is only a fantasy.

HTC Repairer is the top most repairing centre in UK.
We offer a best service for all our HTC customers and carrying the top performance position constantly.
Our trained Experts can resolve any problem like Water Damage , Screen / Display Replacement / Repair etc.,http://www.htcrepairer.co.uk/