MetroPCS iPhone Could Happen, But Don't Hold Your Breath

T-Mobile CEO John Legere told AllThingsD that a MetroPCS iPhone is possible, but not "imminent". T-Mobile acquired the carrier on Wednesday, and is already planning to launch MetroPCS-branded devices that also run on T-Mobile's network. Legere did not say what devices are in the works, but did say that an iPhone is not out of the question. When asked if an iPhone is coming to MetroPCS, Legere replied: "The answer to that is not ‘No'". Legere also said a MetroPCS iPhone would have to involve Apple, before noting he had already reached out to T-Mobile partners. 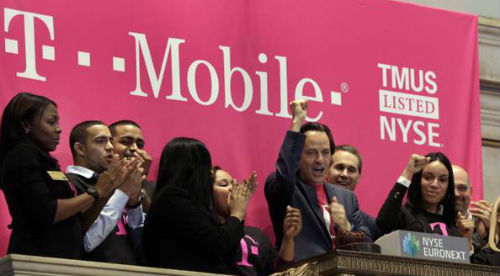 T-Mobile's main focus is merging the two brands, and moving into new cities by offering MetroPCS handsets on the T-Mobile network.

“This is about customer migration, not network integration,” Legere said.

Legere told AllThingsD that T-Mobile is " working through a double-digit list of cities and plans to aggressively target new markets this year".

T-Mobile is one of the most unethical organizations.
Recently they had to lay off many employees before Metro PCS merger, so that they can claim there was not a single lay off after merger. To make this look a great deal, they laid of more employees than they needed so after merger they can hire again and show business community and society that this merger was good for everyone.
Laying off was mismanaged from the beginning, T-Mobile directors like John Pottle who layed of a very hard working manager and replaced him with another manager. Reason this manager lost his job because this honest hard working manager didn’t agree to falsify weekly reports like John Pottle wanted. There are no moral values; one has to always kiss up to senior leaders no matter whatever wrong they are doing.
When an organization has leaders who are corrupt and are eating at the company’s core, it is not only damaging for employees but to business as well. In the name of downsizing and business goals some directors like John Pottle are eliminating employees with the best attitude, most experience and education for their own agenda. This is a result of not having any checks and balances in place to prevent bad decisions from happening. When an organization keeps corrupt leaders like John who with their decisions are harming the employees and the company, it makes me wonder how they will serve their customers.

Dude. Are you just trolling around on every site that mentions T-Mobile to spout off at the mouth? I assume it's you, because of the similarities in grammatical and spelling errors. What happened? Did you get fired from MetroPCS? Sorry about your butthurt, buddy. We can all walk around all day screaming "CORRUPTION!" The fact of the matter is, though, nobody is listening. Especially when the person screaming it can't be bothered with the finer points of the English language. Move on, man. Just... Move on.