Not only did jailbreak tweak developer Filippo Bigarella release an app on the official App Store, but his work is quickly catapulting to the top of the Finance category. Balances is ranked number 6 in the top chart of finance apps only three days after release. So what's making Balances so popular? 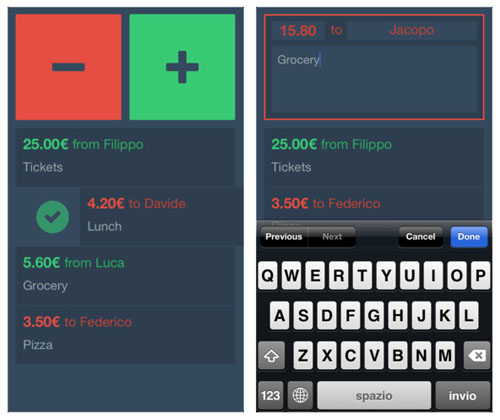 For one, the app has a slick, minimalist design that functions efficiently for the task at hand. Tracking debts owed to others and debts owed to you is intuitive and easy with Balances. Tap the plus or minus button to add an entry, then enter the name, amount and a note. Once the debt has been paid, just swipe and the entry goes into a completed list.

Balances stands on its own as a useful and attractive creation, but Filippo Bigarella's previous work has also helped the developer get plenty of attention. Anyone who has jailbroken their iOS 6 devices is undoubtedly familiar with Springtomize 2, which makes it possible to customize almost every nook and cranny of the iOS Springboard.

It remains to be seen if Balances continues to surge in popularity at its new price of $1.99. The app was initially released on the App Store free for a limited time, and that limited time is now over. Check out Balances on iTunes for more information.