Add a Flash to the Front-Facing iPhone Camera

Wouldn't it be great if your front-facing camera on the iPhone had a flash? Granted, it's probably not something that's needed very often, but having the option is a plus. Now there's another way to add a front flash, with the appropriately named jailbreak tweak FrontFlash. After all, why should only the rear facing camera benefit from a flash in low light? 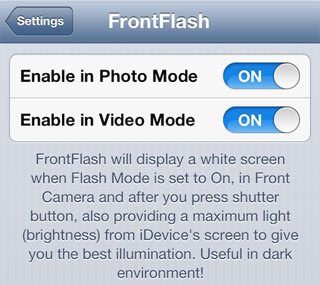 Once installed, FrontFlash provides two options in settings, one to enable the tweak while shooting video and the other to enable during still photos. Let's face it, the front camera on the iPhone still leaves something to be desired when it comes to low light situations. In fact, most of the energy towards developing a quality image has gone into the rear facing camera overall.

At least with FrontFlash there's another straightforward option at the table for people with jailbroken iPhones. The tweak works by simply flashing a white display screen at full brightness when the front facing camera shutter is released. This results in a similar boost to picture quality as using the LED flash found on the back of the iPhone. The tweak requires iOS 6 or later and works with the stock camera app. Known incompatibilities include Front HDR.

FrontFlash is available on Cydia from the BigBoss repo free of charge. Check here for instructions on how to jailbreak iOS 6.x with evasi0n. You can also find out how to purchase and install Cydia tweaks with this guide.