All Sonic the Hedgehog iOS Games Reduced to 99 cents

Unlike Nintendo, SEGA has fully embraced mobile gaming by bringing its classics like Sonic the Hedgehog to Apple and Android devices. There are currently 8 Sonic games available in the Apple App Store, and starting today they are only $0.99. This is a pretty good deal since some titles like Sonic CD were originally $6. Check out a complete list of $0.99 Sonic the Hedgehog games below, and prepare yourself for some awesome retro gaming on your iPhone or iPad. It's unknown how long this sale will last, so make sure you download your favorite Sonic title today! 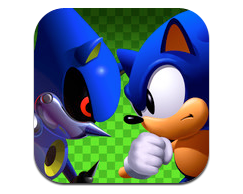 The original Sonic the Hedgehog game that started it all is only $1! The iOS version is optimized for the iPhone 5, and features new characters Tails and Knuckles.

Sonic the Hedgehog 2 was remastered for iOS devices in 2010. However, it has not been updated for later devices such as the iPhone 5.

Both Sonic The Hedgehog 4: Episode I and II have been discounted from $4.99 to $0.99. Now you can download both episodes for less than the original asking price of one.

Sonic CD was originally released for the SEGA CD console in 1993, the game was ported to the iPhone using the "Retro Engine". It has been updated to support Retina display, and features both the US and Japanese soundtracks.

Sonic & SEGA All-Stars Racing features 12 iconic SEGA characters as racers competing in 16 Sonic-inspired races. The game includes a four player online mode and 25 solo missions, but it's not optimized for the iPhone 5.

Sonic Jump has always been $0.99, and both Sonic 4: Episode II Lite and Sonic Dash are free.