Apple released iOS 7 beta 2 to developers right on schedule, two weeks after the original dropped at WWDC. Most developers originally thought the upgrade would only bring speed and performance improvements, but a host of new features are already being discovered. One big discovery includes the addition of contact photos in group conversations. This is a feature iOS users have been wanting for a long time, and one of the few perks jailbreakers have been enjoying thanks to tweaks like ChatPic or Copic. You can also now choose to have nicknames enabled so they will appear in group chats instead of the person's actual name. 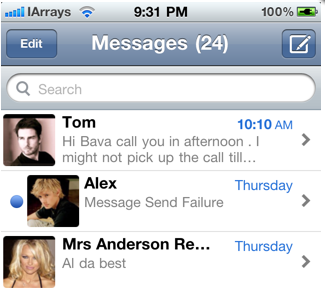 Unfortunately, the contact photos only appear in group messages, but hopefully Apple will add them to all messages and texts before iOS 7 is released. The stock Message app also received a few visual tweaks like a larger Send button, and a new send animation. Other tweaks discovered in iOS 7 beta 2 include Siri's new male voice, and a return of the stock Voice Memos app which disappeared in the original beta.

Apple released the first iOS 7 beta on June 10, 2013. The new operating system brought one of the biggest fundamental changes to iOS since the original iPhone was released in 2007. Apple is expected to release the new OS to the general public along with the first next-generation iPhone sometime this fall.