With each passing day more lower-priced iPhone parts are photographed and leaked from the supply chain. At least this is what AppleDaily wants us to believe. Considering the large number of matching photos form several sources Apple might actually launch the device in the colors pictured below. 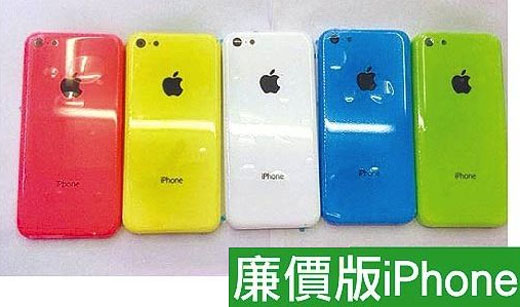 Aside from offering the so-called budget iPhone alongside the flagship iPhone 5S this fall, Apple is expected to release iOS 7. One thing is clear, the bright hues found in the company's latest operating system could have met their match in the external plastic parts of the budget iPhone. Of course, it's possible these parts are knock-offs and will never see the light of day.

So what about the hardware Apple is expected to offer in the budget iPhone? Should the parts leaks be authentic, the device will be around 2mm or 3mm thicker than the iPhone 5. Both devices will have the same 4-inch Retina display. Other details are hard to come by, including whether or not Apple will actually launch a lower-priced plastic version of its smartphone.

When it comes to the iPhone 5S, rumors are circulating of a faster graphics processor along with a possible dual-flash upgrade. Apple could also incorporate 120fps video on the device, allowing users to record high-quality slow motion video.