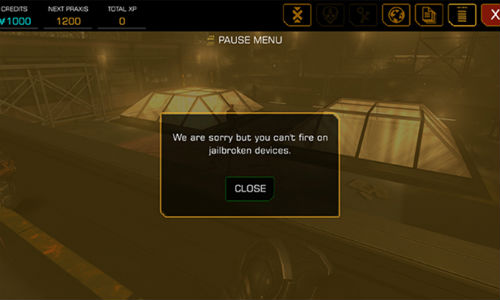 “We have not been clear in our communication earlier this week when we launched Deus Ex: The Fall. We did not state clearly that the game would not support jailbroken devices and so we will be switching this off via an update, so that all the supported iOS devices will be able to play the game in the near future.”

“We feel it’s the right thing to do in this situation and apologise for any inconvenience this may have caused. No customer should be out of pocket when we were not clear from the start, so we’ll get the game updated as soon as possible so that everyone who wants to play Deus Ex: The Fall can do regardless of whether their device is jailbroken or not. As soon as this update is live we will communicate this via the Eidos Montreal Community channels.”

"Please be aware, the Deus Ex: The Fall play experience is currently restricted on jail broken devices. Do not purchase if you have voided your warranty and have Jail broken your device."

This may be the first time a major developer has apologized for disabling an app's features on user modified devices, but it is not the first time one has decided to reverse its stance on hacking. Redbox recently lifted its rooted Android ban after negative feedback piled up in the Google Play store.

Square Enix did not give a reason for its jailbreak block, but developers may be realizing they're leaving out a huge piece of the mobile population by restricting jaibroken or rooted devices.