GPS for the iPhone is Here - and Free!

There has been a great deal of skepticism at numerous reports iPhoneFAQ has published which have revealed a couple of different ways to add GPS to the iPhone without hardware changes, either via the addition of a GPS chip embedded on a SIM card or by utilization of the E-911 mandated positioning abilities native to the iPhone. Regardless, news out of Engadget this morning has revealed that the latter method is now being used effectively to provide GPS abilities on the iPhone via third party software provided by a company named Navizon. The best news? It's free. 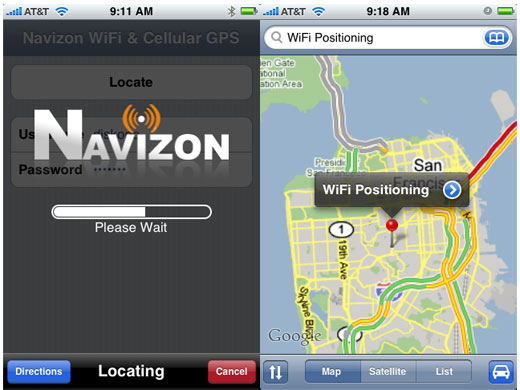 Well, sort of. It's a rough implementation of A-GPS. A-GPS is assisted global positioning that can be accomplished using a handful of different methods. One of these methods does not require a GPS chip

, and instead uses cellular tower signal triangulation to generate a location from the handset. With the iPhone lacking a GPS chip (to our knowledge), this is the method the Navizon software is using to provide GPS on the iPhone. The good news? It works. The bad news? It's less accurate.

The point is, less accurate than what? Is it less accurate than the complete lack of GPS ability previously found in the iPhone? Of course not. So, what Navizon is offering is a HUGE step forward for iPhone owners. Being able to nail down your location on a map within a few hundred yards is still better than not being able to do so at all.

Additionally, according to Navizon, the software offers WiFi positioning. This is a new one for us. Though, apparently WiFi positioning is based on Navizon users sharing data via the Navizon software about the location of WiFi hotspots their devices connect to. Subsequently, this information can be shared with other users who can then position their device based on the locations of known WiFi hotspots. According to Navizon's website:

Members with a GPS device can use Navizon to map the Wi-Fi and cellular landscape in their neighborhoods. Once they synchronize their data, it is made available to all the other users of the network. This way, users who don't have a GPS device can benefit from a positioning system.

As with all third party software available for the iPhone at this point, the Navizon package is unauthorized and is considered a "hack". Installing it on your phone will require that you jailbreak your iPhone and install it using one of a variety of handy utilities or via manual methods. As always, proceed at your own risk.

UpdateOne additional word of warning: though the Navizon package is proving effective and handy for many users so far, there are reports of the software bricking a few phones and requiring a restore. Again, at your own risk.