The popular flash game Knightmare Tower is now available for iOS devices. In the game, players must launch their knight off the heads of monsters to propel themselves to the top of the Knightmare Tower to save the ten princesses. Users earn gold along the way to spend on various upgrades such as potions and accessories. The iOS version features different armors, swords and boots for those who like a little extra bling in their video games. Other features include a campaign mode with 70 quests, a survival mode, over 50 monsters to slice and dice, plus an epic boss battle. 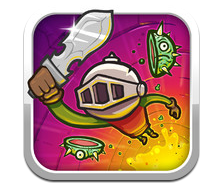 Knightmare Tower is a fun game that adds an interesting twist the the toss game genre. Think Burrito Bison if the goal was to go vertical instead of horizontal. Also don't let yourself be fooled by the cute looking cartoon graphics, Knightmare Tower is just as challenging as it is addictive

Knightmare Tower is now available for $2.99 from the Apple App Store. It's compatible with the iPod touch (5th generation only), iPhone and iPad. It requires iOS 4.3 or later and is optimized for iPhone 5.