Schedule the iOS Passcode to Turn Off

Despite the release of iOS 7 there are still some useful jailbreak tweaks being released by developers for those running iOS 6-6.1.2. PasswordTime is a free tweak that will schedule the iOS passcode to be enabled during specific hours. Although this could be a security problem, this idea brings convenience to the forefront instead. 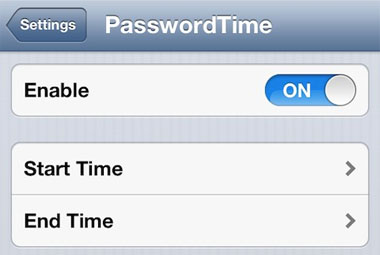 Just like scheduling Do Not Disturb, the tweak PasswordTime makes it possible to set a Start Time and End Time for passcode security. Turning off the passcode at the same time every day can save time and energy when unlocking the iPhone in a safe location. For example, when returning home from work in the evening, the passcode can be automatically switched off.

Other options to modify the iOS passcode are available on Cydia. While PasswordTime will only set a schedule for the iOS passcode, CleverPin will disable the passcode after a friendly Wi-Fi network has been joined. The Android lock pattern can be added to iOS with PatternUnlock, and even free form gestures can be used thanks to Stride.

PasswordTime is available on Cydia from the BigBoss free of charge. Check here for instructions on how to jailbreak iOS 6.x with evasi0n. You can also find out how to purchase and install Cydia tweaks with this guide.