Real Racing 3 for iOS continues to receive frequent updates from Electronic Arts. This time, the most significant change adds real-time multiplayer so that several players can race simultaneously using Game Center. Previously, the only way to race another player was to compete against an avatar replaying a completed race. 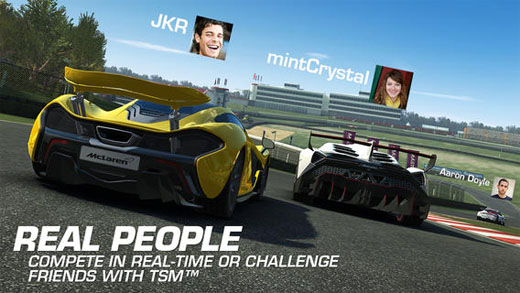 Version 2.01 irons out some bugs with the real-time multiplayer feature, which initially disconnected all participants when one player was experiencing a bad connection. Real Racing 3 now has even more new cars to race, including the Lamborghini Veneno and McLaren P1 added in the latest update. Real Racing 3 is free to play, with in-app purchases available to enhance the experience.

Many performance issues and bugs have been fixed, and new events and game modes keep things fresh. For fans of racing games, Real Racing 3 pulls out all the stops to bring top notch graphics and gameplay to the iPhone, iPad and iPod touch.

Here's the complete change log for version 2.01 from iTunes:

Real Racing 3 can be downloaded free and is compatible with iOS 5.0 or later. This universal app requires at least 1.1 GB of storage space to install.