One of the biggest complaints against iOS 7 has been its sluggish performance due to the slow animations that occur when opening an app or a folder. Although Apple purposefully designed iOS 7 this way in order to create a more enveloping user experience, most people seem to prefer quick access without the aesthetic bells and whistles. If the animations aren't your cup of tea, you can use the new jailbreak tweak NoSlowAnimations to speed up your experience. 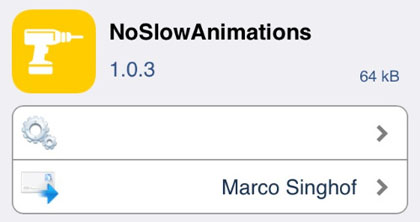 The NoSlowAnimations tweak, which was developed by Marco Singhof, can be found on Cydia in the BigBoss repository. Simply install the app and you should notice a significant increase in animation speed, especially while switching, launching and closing apps. There is no setup process and there are no options to configure, but

NoSlowAnimations is fully compatible with both 32-bit and 64-bit devices and requires iOS 7.0 or better. It is currently available for free in Cydia's BigBoss repo.