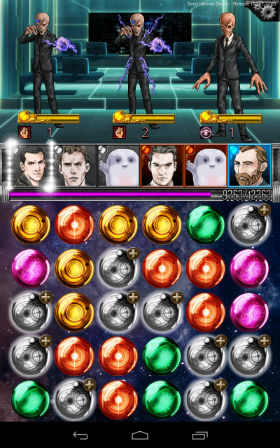 The Season 5 story arc adds the latest incarnation of the Master, John Simm, and past Masters, Roger Delgado (the First Master) and the burnt Master from The Deadly Assassin. Four more incarnations of the Doctor also join the game. They include, the First Doctor (William Hartnell), the Second Doctor (Patrick Troughton), the Ninth Doctor (Christopher Eccleston) and the War Doctor (John Hurt).

The Perk system allows players to unlock new abilities and level up their allies as they advance through the game.

Doctor Who: Legacy is a match-three puzzle RPG. It is available for free on the Apple App Store and Google Play. Tiny Rebel Games and BBC Worldwide have also announced that a Facebook browser version "is coming this month".

The game is compatible with all devices running iOS 6 or later.