China UnionPay, a Chinese bank card organization (currently the only one), on NFC payments. 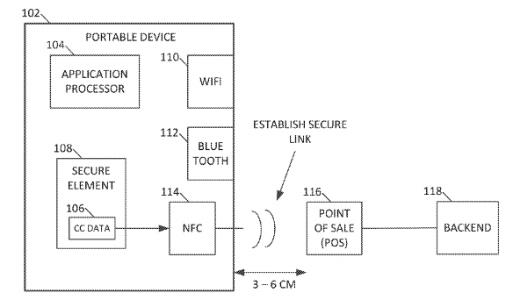 A patent application from January 16th of this year supports Hettenbach's prognostication. The patent is titled "Method to send payment data through various air interfaces without compromising user data," and describes using a secondary link in addition to an NFC link:

In one or more embodiments, a portable device can make purchases by using near field communications (NFC) to establish a secure link with a point of sale (POS) device connected to a backend system that is configured to execute commercial transactions. This secure link can be established by positioning the portable device to be within close proximity of the point of sale device. Increased mobility is provided to users of the portable device making purchases by establishing a second secure link that uses a different protocol, such as WIFI or Bluetooth, that has more desirable characteristics for maintaining the link over time than NFC.

An image accompanying the application also clearly shows an NFC element of the system (pictured above). Hettenbach also believes Apple will likely tap NXP Semiconductors (formerly a division of Philips) to supply the chip, as it already supplies the M7 motion sensing chip found in the iPhone 5s.

KGI Securities analyst Ming-Chi Kuo, who has a history of accurate predictions regarding Apple devices, has also indicated that he believes the iPhone 6 will contain an NFC chip.