More alleged iPhone 6 parts have surfaced on China's version of Twitter. A Weibo user posted several photos of what appears to be the next generation display backlight. According to Nowhereelse.fr the design of the leaked backlight matches current parts from the iPhone 5s, except for one thing. 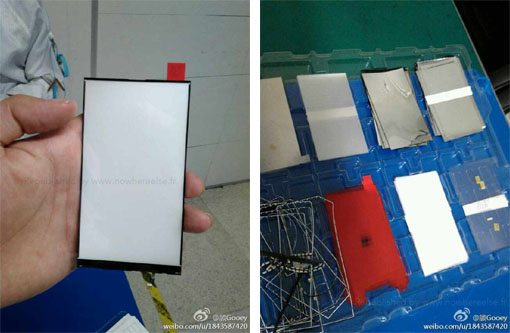 The ribbon cable position and connector have been updated, indicating changes to the part. While the original poster claims the backlight is indeed 4.7 inches diagonal, the origin and size of the part could not be independently confirmed. Assuming the backlight is real, production of the larger iPhone 6 handset must be in full swing.

Apple is expected to launch two different sized iPhones later in 2014. While the 4.7-inch version could be released later this summer, a larger "phablet" device is not expected until later in the year. WWDC is likely to showcase iOS 8 and other new developments Apple has been working on ahead of the upcoming mobile hardware launch. Observers are not anticipating that the company will reveal the iPhone 6 in the event in early June.

Many leaked images have hinted at the appearance of the iPhone 6. Despite the larger display, Apple's next smartphone will have a thinner profile. Some are expecting a curved aluminum back, and artists have already started to compile leaks into renderings of what the iPhone 6 might look like.