Trolling is not only an art, it is also a new advertising strategy utilized by T-Mobile CEO John Legere and now Samsung. The South Korean company has taken its "Wall Huggers" campaign to select airports to troll customers who are stuck using power outlets to charge their mobile devices. Samsung has placed posters near power outlets that read:

"Samsung Galaxy S5 with Ultra Power Saving Mode. So you have the power to be anywhere but here” 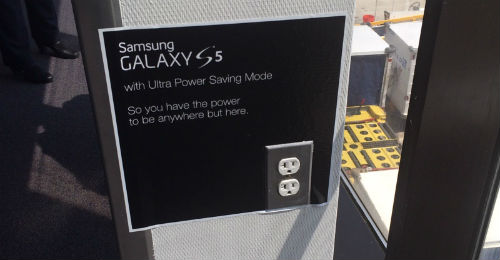 The campaign is obviously aimed at the iPhone and other Apple devices. The posters have been spotted at the Newark airport in New Jersey and will be added to John F. Kennedy International in New York and to O’Hare and Midway in Chicago, according to CNET.

Samsung recently announced that its new Galaxy Alpha smartphone will launch in September, the same month Apple is expected to announce the iPhone 6. The Galaxy Alpha is a new stripped-down version of the Galaxy S5 with a metal frame and compact body. It is powered by a octa core chip with 2GB RAM and Android KitKat 4.4.

Motorola is also set to announce its newest smartphones in Chicago on September 3rd, which is a few days before Apple's rumored iPhone 6 event on September 9th.