We always enjoy keeping our readers up-to-date on the latest in third party applications available for the iPhone, especially when they are this darn good. Yesterday, a new application named GeoPedia was released. GeoPedia takes advantage of geographic positioning functionality, like those introduced in iPhone firmware 1.1.3, and provides iPhone owners with a Wikipedia feed customized to their current location.

Once installed, one need only launch GeoPedia on their iPhone to receive a iPhone stylized interface featuring a list of Wikipedia articles relevant to the phone's location. Check out the sample screen shot below for an example of GeoPedia's interface. 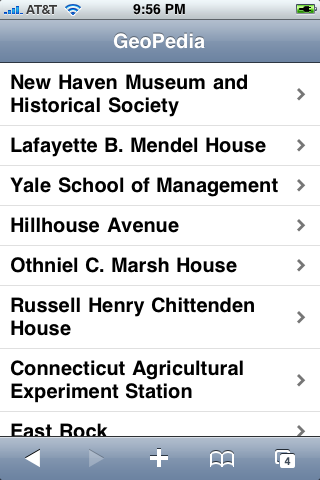 Users can browsed the location-customized list of Wikipedia articles that GeoPedia returns and then navigate to articles of interest to learn more. As your location changes, simply refresh GeoPedia and the feed will update. Wikipedia will follow you wherever you go.

The usefulness of GeoPedia to traveling iPhone owners (which we all are, in a sense) is easy to imagine. Have some time to kill after a business meeting in an unfamiliar city? Let GeoPedia and Wikipedia provide some fodder that might lead to some interesting excursions. Exactly how well GeoPedia works is yet to be seen, but the idea is a good one, and so far users are reporting some pretty impressive results.

The application only works on the iPhone, not the iPod Touch, as it requires a network signal in order to provide positioning. You can install GeoPedia by downloading it directly here. GeoPedia is also expected to be available shortly via Installer and Cydia.