How to Turn iPhone Burst Photos into Animated GIFs

Ever notice how groups of photos taken in Burst Mode resemble the frames of a video? This comes as no surprise, as the images are captured at high speed. Now the app Burstio makes it possible to create a video or animated GIF directly from a burst group. The process is straightforward; simply open the app and select the Burst Mode photos to use. 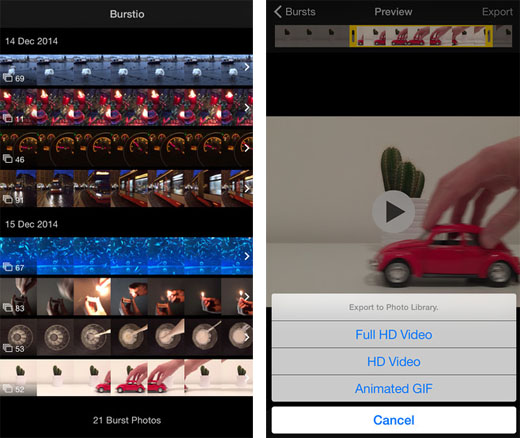 The preview can be trimmed, using the same interface used to trim video length. Once the desired frames are selected, touch Export and a menu will appear. Animated GIF will create a 320x240 animated GIF, which can be saved to the Photo Library or shared. There are also options to save your work as a Full HD Video or an HD Video. Options to increase or slow the playback speed are also provided, for special effects.

Developer Michal Kos is offering Burstio on iTunes for the introductory price of $0.99. The app requires iOS 8 and an iPhone 5s or later. Older iPhones are not officially capable of shooting in Burst Mode. Click here to learn how to use Burst Mode on the iPhone 5s, iPhone 6 and iPhone 6 Plus.

Animated GIFs are semi-supported in iOS, and will display properly in the Messages and Mail apps. However, once saved to the Camera Roll the animations will appear frozen. Those with jailbroken devices can avoid this problem and view animated GIFs in the Photos app with GIFViewer.