Apple Automotive Project to 'Give Tesla a run for its money'

At least that's how one unnamed Apple employee feels, according to his email to BusinessInsider. He says that "Apple's latest project is too exciting to pass up," and he thinks "it will change the landscape and give Tesla a run for its money." He also says that Tesla employees are leaving their company to join Apple because of it. 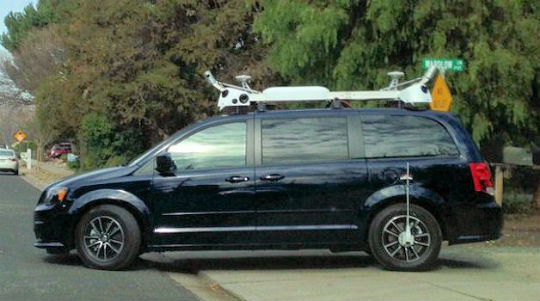 There has been a lot of speculation recently over what "it" may be, especially after the recent rash of Apple minivan sightings. The minivans are loaded with cameras and other equipment and have been spotted around the Bay Area, Hawaii, Wisconsin, Texas, New York and even Panama. This has fueled rumors

that Apple is working on a self-driving vehicle, though that seems a bit far-fetched. More likely they are enhancing their 3D mapping, building their own version of StreetView or testing something with CarPlay.

Whatever Apple is doing, and whether or not it has to do with these vans, the company is interested in Tesla employees. According to Bloomberg, Tesla CEO Elon Musk admitted that "Apple tries very hard to recruit from Tesla... But so far they’ve actually recruited very few people.” According to LinkedIn, Apple has about 50 former Tesla employees among its ranks, mostly engineers with backgrounds in mechanics, robotics and manufacturing.

This anonymous email has opened the floodgates; we'll likely be hearing rumors of an Apple car for months to come. Though a vehicle seems out of the company's scope, Apple certainly has the resources to experiment. Also, whatever they are working on, it seems that "giving Tesla a run for its money" would be a bit of an exaggeration for anything less than a full blown vehicle.