According to a leaked document obtained by BGR, Best Buy is preparing to accept pre-orders for the iPhone 5 during the first week of October. The memo reads: BBYM: iPhone 5 product introduction expected, pre-sales to begin for expected October week 1 launch / Sprint launches iPhone 5.

The memo does note that launch dates are subject to change. 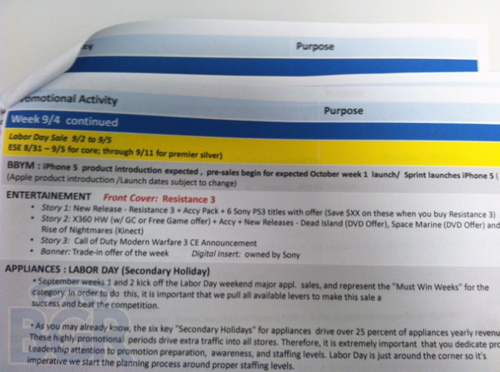 Most likely Best Buy is just going along with the consensus that Apple plans to release the iPhone 5 in October, and doesn't have any real inside information. However, it does seem like they're determined to prepare for an Apple launch no matter what kind of intel they have. Thisismynext posted a screen grab of the Best Buy National Retail Calendar that reveals plans to outfit a store with some kind of "Apple fixture" on October 21, 2011.

"To be clear, this isn’t a run-of-the-mill installation for the big box — our tipster tells us that the request that a manager be on-hand at 6AM is out of the ordinary (they usually show up at 7AM for inventory), and that a similar arrangement was scheduled for the iPhone 4 launch. While it seems strange that thousands of retail employees could potentially be clued into iPhone availability over six weeks in advance, the language in Best Buy’s system is sufficiently vague so that it could technically be anything."

The Thisismynext tipster said that Best Buy Mobile managers are scheduled for an October 10th meeting to “discuss upcoming BIG release dates." I guess "BIG release dates" could be anything, but I can't imagine anything bigger than the iPhone 5.