The developers behind Ultimate Robot Fighting have teamed up with DreamWorks to release Real Steel Champions based on the movie franchise starring Hugh Jackman. The new title is part of a series of games with over 50 million users worldwide. 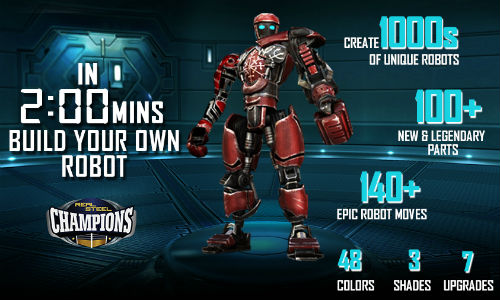 Real Steel Champions will be the first game in the series that allows players to build their own robots and train them to battle in 10 new arenas. Players will be able to to design their own robot using various parts including heads, torsos, legs and arms from fan favorites such as Atom, Zeus, Noisy Boy, Midas and Metro. The game will also feature a Tournament mode, boss battles, 30 challenges, a Free Sparing mode and more.

Real Steel Champions will be available for mobile devices in March.

The other games in the series include Real Steel and Real Steel World Robot Boxing. Both games take place in the same universe where "boxing has gone high-tech in the not-so-distant future," and both include popular robots from the 2011 film, such as Twin Cities.

Real Steel is available for $0.99 and Real Steel World Robot Boxing is currently free on the Apple App Store.

As for the movie franchise, Hugh Jackman and director Shawn Levy are reportedly working on a sequel but both have been busy with other projects. Levy told ComingSoon a few months ago that he hasn't forgot about the franchise:

“We have been quietly developing a sequel to ‘Real Steel’ for three and a half years,” Levy revealed. “We’ve come up with some great scripts but Hugh and I would only make it if the plot feels fresh, but also the character journeys feel fresh, and we’ve found both but never at the same time. It’s ongoing. I know the clock is ticking. That movie, weirdly, for a movie that did very well globally–it did okay domestically–but the love for ‘Real Steel’ remains kind of unique as far as rabid fans who ask me all the time for another one. Hugh and I love that movie so if we can crack it, we’ll make it, but I have this sense that we better make that happen soon or frankly, the audience may not be there in the same way. So we shall see.”

It is unknown exactly when Real Steel 2 will land in theaters but some rumors have suggested a 2016 release is most likely.