Does the Apple Watch have a speaker?

Does the Apple Watch have a speaker?

Yes, Apple Watch features a built-in speaker. The speaker and built-in microphone are used for voice calling and Siri interaction. Notifications are also delivered via the Taptic Engine, which gently taps the wrist to alert the wearer. 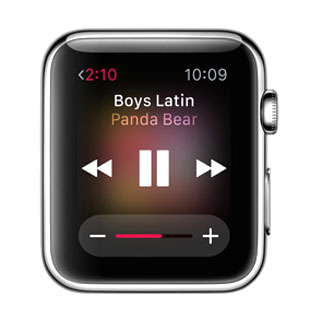 While Apple Watch supports sound output, it's not clear whether music playback will be supported through the speaker or only via Bluetooth headphones.

This is just simply not true. Without a speaker (which is on the left side of the watch), how do you place/receive phone calls, listen to voice messages, etc...?

Thanks for the feedback. Updated.

Apple Watch built-in speaker has 3 do's and 2 don'ts, you can make better use of it in regard of audio input and output.
Apple Watch Built-in Speaker 3 Do's
Apple Watch built-in speaker makes it possible for a private interaction between men and the watch. You can in the first place dictate message content through Quick Board because the watch face is too tiny for a keyword. Then you can vocally wake up Siri to find the nearest Chinese restaurant, bus station, or etc. Apart from that, Apple Watch built-in speaker can alert you for an incoming call or message with its Taptic Engine.
As its name indicates, Apple Watch built-in speaker is indeed private, which also comes with some inconvenience.
Apple Watch Built-in Speaker 2 Don'ts
Music Blast:
As indicated above, Apple Watch built-in microphone and speaker are more appropriate for a kind of more private and low-decibel communication. It can't output such high quality and resounding audio music as Mac/PC. However, this lightweight and portable device is really something you can't reject. To make Apple Watch a both private and public speaker, you need 5KPlayer. 5KPlayer features its built-in AirPlay function which receives and amplifies audio stream from Apple Watch. In this way you can AirPlay music audio from Apple Watch to Mac/PC to enjoy its fantastic playback. This speaker really makes you alter flexibly from low volume chats to resounding audio blast. Imagine yourself exercising on a treadmill, you can remotely stream music to this Apple Watch speaker on Mac/PC without pausing the step.
Film Audio Amplify:
This Apple Watch speaker is also capable of video streaming to Mac/PC. When the watch taps your wrist for an interesting video post on Facebook or Instagram, it would be of course too feeble to view it with the tiny face and speaker. That's the time when you really need 5KPlayer, because it is not only a sophisticated AirPlay speaker but also an AirPlay video receiver from Apple Watch to Mac/PC without quality loss.

It must have one player since it could make phone calls. http://www.macblurayplayer.com/features.htm Macgo Mac Blurray Player could play blu-ray video.