App of the Week: Runeblade for Apple Watch 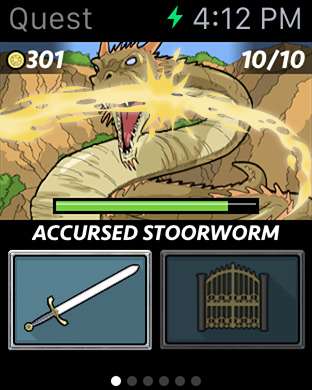 Most Apple Watch games offer quick 10-15-second mini-games that you can play on the go, but Runeblade from Everywear Games is a fantasy adventure title that you can play for months. Runeblade is still played in 5-15-second bursts, but the it features RPG-elements where players can collect and upgrade weapons, armor, spells and so on.

In Runeblade, players take on the role the of High Priestess from the War Mages and do battle with deadly creatures to save their realm. The game promises to offer a simple pick-up-and-play design while "increasing in complexity over days, weeks and months". Players will be able to grow in power, collect artifacts and earn achievements as they advance through the game. The game comes with a iPhone companion app where players can purchase items, but otherwise it is exclusively played on the Apple Watch.

Runeblade is free to download on and includes some in-app purchases. Everywear Games also promises "more content, features and game play is on the way".

"The order of the War Mages is faced with an impossible situation. After millennia of slumber, their own gods are awakening only to turn corrupted and determined to destroy the world. The order selects a champion to continue the fight against the evil, but time is running out as the wrath of the Arai is already seeping into the world! Grab your Runeblade and begin the adventure!"