iOS App of the Week: Guild of Dungeoneering 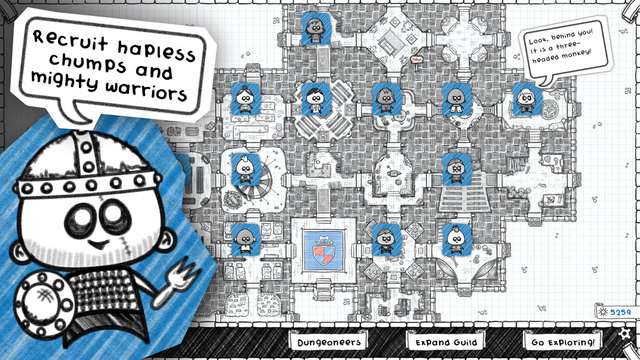 The roguelike dungeon crawling genre has a rabid fan base who are always eagerly looking for new titles to play on their computer and mobile devices. This is why Guild of Dungeoneering was a highly anticipated App Store release for the iPad. Even though the game has been available on Steam for over a year, the mobile version didn't make its debut until PAX South in March 2016. The card-based dungeon crawler has finally been released for iOS devices this week, and it is a universal app, even though it was originally thought to be a tablet-only title.

Guild of Dungeoneering is a turn-based RPG card game with a twist. Instead of just controlling the game's hero, players must build their own dungeon around the hero and coax them through the adventure. Players can build their dungeon and fill it with monsters, loot and traps by playing specific cards from their Guild decks. The goal of the game it to complete dungeon crawls to gain experience and money to improve your Guild and attract better classes of adventurer. Players can also earn new cards and unlock more rooms and equipment as they play the game.

Guild of Dungeoneering is more than just your typical dungeon crawler. The game requires a bit of strategy on how you play your cards to bribe your hero through an adventure. The game also allows you to be the Dungeon Master and player at the same time.

Guild of Dungeoneering features its own unique "pen and paper" art style and it promises to deliver "catchy music and hilarious writing." The game is available now for $3.99. This is a one time download fee that will increase every time a new content is added. The next scheduled content update is the Pirate's Cove expansion pack, so make sure you grab the game now and get it at a cheaper rate. All future updates are free once you purchase the game.

Guild of Dungeoneering is available now on the App Store. It supports all devices running iOS 7.0 or later.