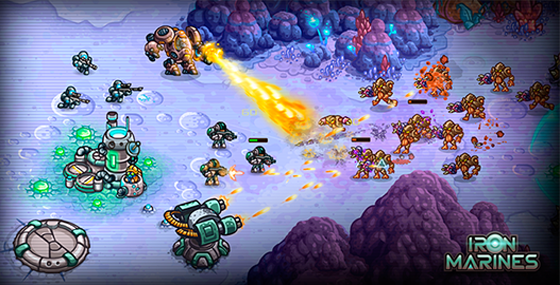 The creators of the Kingdom Rush franchise, Ironhide Game Studio announced its next title called Iron Marines. The real-time strategy game is slated for a "mid-2016" release on iOS and Android with Windows, Linux and Mac releases planned for a later date. Ironhide describes the game as a Sci-Fi RTS with lots of action and "tons of dumb jokes," but that is all the details they have revealed about the new game.

You can keep updated on Iron Marines by signing up for the official newsletter or by following along on Twitter and Facebook.

Kingdom Rush fans do not need to be disappointed as Ironhide is not abandoning the franchise. Ironhide mentioned in the comments section of their official blog that another KR title is in the works.

Kingdom Rush is a popular fantasy tower defense franchise made up of three games: Kingdom Rush, Kingdom Rush: Frontiers and Kingdom Rush Origins. Ironhide is known for creating fun engaging games and supporting those games long after their initial release. We can only expect the same for Iron Marines.