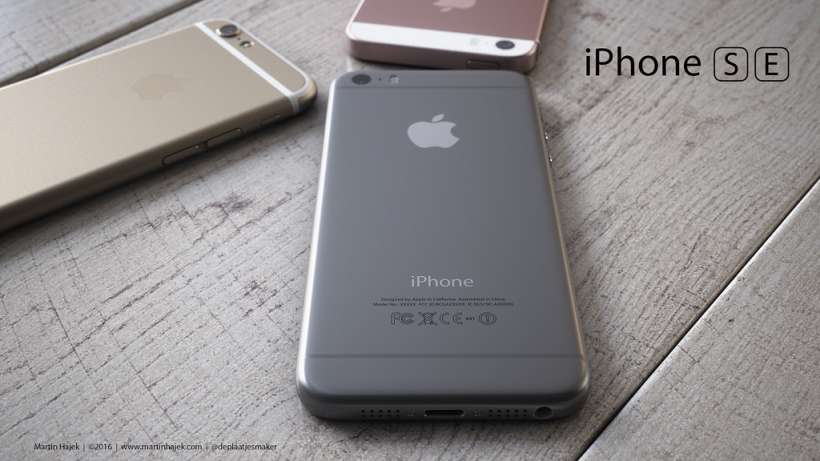 Peak season for iPhone speculation has arrived, partly because Apple is expected to release new models in both March and September. This departure from its normal once annual iPhone refresh means more options for anyone looking to update their device. The March media event now looks to be scheduled for Monday the 21st, during which Apple will reveal a new 4-inch iPhone. According to Chinese site My Drivers, the fall could see an even bigger surprise.

Apple could be preparing to launch three different iPhone 7 models in September. The latest report points to the iPhone 7 Pro as a flagship model featuring capabilities not found in other iPhone 7 variants. This brings the complete list of iPhones in the pipeline for 2016 to four. Here are details on what is currently known or rumored for each different model.

The iPhone SE renderings from Martin Hajek shown above represent three different leaks showing what the device could look like in its finished form. Ultimately, it's the same form factor as the iPhone 5s with a 4-inch display. Different concepts indicate varying levels of roundness, with the device appearing more like an iPhone 5s in some reports. Others have a stronger design link to the iPhone 6s.

Internals will likely bring the smaller iPhone in line with the iPhone 6s. This includes an A9 processor, M9 motion coprocessor, 12 megapixel camera, and Apple Pay. However, the iPhone SE could max out at one GB of RAM and 64 GB of internal storage. Not only will the iPhone SE be more affordable ($500 or less), but the device is not expected to support 3D Touch. Over the past year, the iPhone SE has also been referred to as the iPhone 5se and the iPhone 6c.

Coming in September, the iPhone 7 will launch with iOS 10 (iOS X?) and the A10 processor. Besides refinements such as invisible antenna lines and a completely flush rear camera lens, one of the big features on the horizon could be IP67 rated waterproofing. Rumors of a partnership with Japan Display could mean Apple is eyeing LCD touch panels designed to work properly with wet fingers.

Of course, the iPhone 7 Plus will offer a larger display size, bigger battery and possibly camera upgrades such as Optical Image Stabilization (OIS) not found on its smaller sibling. Both models of the iPhone 7 could abandon the 3.5 mm headphone jack. Instead, Apple is said to be working on Lightning and Bluetooth headphones for audio.

The latest addition to the 2016 lineup is the iPhone 7 Pro. The moniker would bring some MacBook and recent iPad lingo into iPhone product offerings, including the word Pro for the first time. Speculation that the iPhone 7 Plus would include a special dual-camera setup may roll over into the iPhone 7 Pro, should it prove to exist.

Dual cameras have been pegged for providing everything from 3D scanning capability to optical zoom, and even light field capture. Light field imagery, first pioneered by Lytro, can be refocused after the fact. Should Apple reserve these features for the iPhone 7 Pro, they would be worthy of the name.