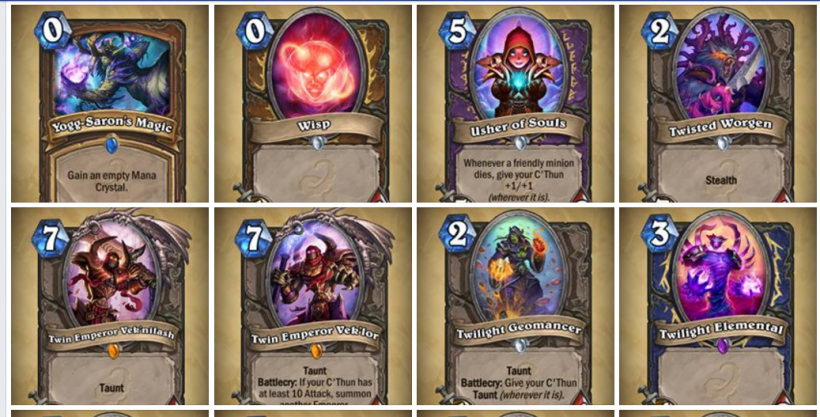 Blizzard on Friday revealed all 134 cards from the upcoming "Whispers of the Old Gods" expansion for its collectible card game, Hearthstone. You can see all of the cards uploaded to the Hearthstone Facebook page, and see some of them in action during the live exhibition matches which were held on Thursday.

Blizzard also announced it is holding a contest for anyone planning a public launch party. If you're 18 or older and organizing a Whispers of the Old Gods event in a public space (café, restaurant, bar, meeting hall, etc.), then you can register it here for a chance to receive materials to make your launch party an even bigger "success."

Do people honestly think that you need more cards to get good at this game? There's NO WAY adding different cards is going to get you better, not to mention more and more scrubs are joining the game everyday, we should be smashing the scoreboards right? No that's not the case, Hearthstone is a difficult game as it is so why make it worse.

All it takes is time+practice+more time. Although there are shortcuts to achieving this. Like this hearthstone guide I've been using: http://gamesinfun.com/learn-hearthstone-mastery. All my friends want to know how I learnt so fast but I'm not telling them NOTHING. Do what you need to do to get ahead of the game guys.