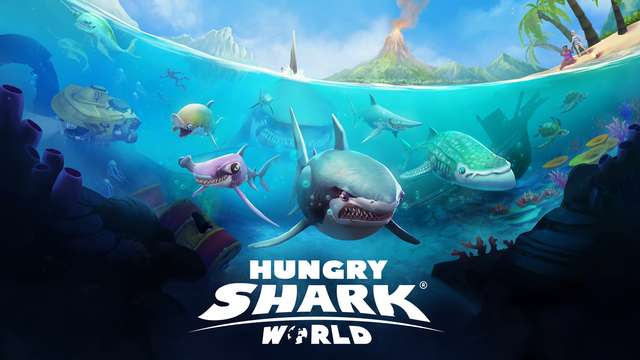 Hungry Shark is a classic everyone has played at some point in their life. The game has spawned several sequels, including Hungry Shark Night, a tie-in to the mostly forgotten PG-13 killer shark flick, Shark Night 3D. Ubisoft has updated the series with the release on Hungry Shark World. The new version of Hungry Shark is a big improvement over its predecessors with large open worlds, tons of enemies and hazards, plus entire oceans of stuff to eat and destroy.

The goal of Hungry Shark World is to survive as long as possible while trying to collect enough gems to unlock larger sharks. This is easier said than done as you must navigate dangerous oceans filled with larger predators, water mines and speargun equipped scuba divers. You begin the game as the small but nimble Blacktip Reef shark in the Pacific Islands. You swim around eating random fish, crabs and other sea life while trying to collect gems, coins and finish achievements. As usual, the easiest prey is unsuspecting humans at the surface, but below the surface you must avoid things that are hazardous to your health, such as large crabs who attack back, other sharks and spiny blow fish. You also can explore sunken ships and other undersea locations, but don't forget to constantly eat or your health bar will be depleted.

Hungry Shark World features 17 shark species to unlock, 3 open worlds, 20 different missions and it is the first game I have encountered with Apple Replay Kit enabled. Apple Replay is the ability to record your gameplay and save it as a video to your Camera roll.

Hungry Shark World is available for free on the Apple App Store. It includes IAPs and it is ad supported. The game supports newer devices running iOS 8.0 or later, and it includes 3D Touch support for the iPhone 6s and 6s Plus.