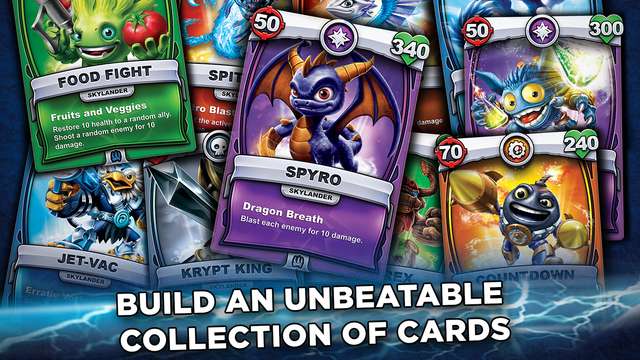 After dominating the interactive toy / video game market, Activision has set its sights on mobile users by bringing its popular Skylanders series to the App Store as a collectible card game. Skylanders Battlecast is a Hearthstone-like title where players can unlock and collect 300 Character, Spell, Gear and Relic cards from the Skylanders universe.

As with the main Skylanders series, players can purchase physical cards from brick and mortar locations to scan and unlock digital cards within the game. Battle Packs and additional coins are also availble within the app as IAPs. Players can use their unlocked or purchased cards to battle Kaos and help save the Second Dimension from being conquered.

Skylanders Battlecast features 64 solo single player missions across eight elemental islands, PvP battles, daily quests and more. Players can equip their Skylanders characters with gear cards and learn powerful spells to crush their competition and Kaos' legion of Evil. The game is free to download from the Apple App Store, and it supports alls devices running iOS 8.0 or later.

Battlecast Starter Packs are available now from online retailers such as amazon.com and local Skylanders retailers. Remember, physical cards are not required to play the game.