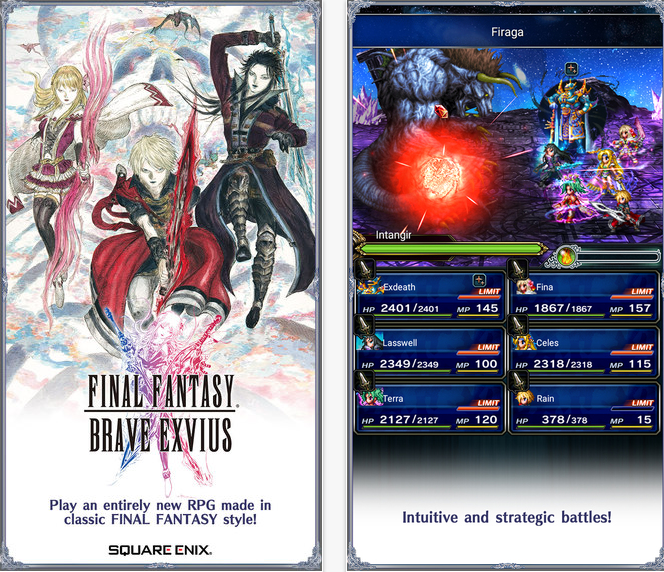 Square Enix has released a lot of Final Fantasy games to the App Store, but up until now most of them have been remakes of the classic console titles. The latest Final Fantasy mobile release is a collaboration between Brave Frontier creator A-Lim and Square-Enix. Final Fantasy Brave Exvius was designed specifically for iOS and Android. It is also a freemium title, unlike the main Final Fantasy games, which are primarily premium releases. Brave Exvius was originally launched in Japan in 2015, but it has finally made its way to the US App Store.

Like the other Final Fantasy titles, Brave Exvius is a turn-based RPG that borrows its battle system from Brave Frontier. The game includes its own original storyline where two brave warriors must stand against the darkness to defend Lapis -- a "world of crystals and the visions that slumber within." The game features warriors called Visions, which are the physical manifestation of the "hopes and dreams of legendary warriors."

Brave Exvius includes legendary heroes from other Final Fantasy titles and the ability to summon espers from other games, such as Shiva, and Ifrit. In the game players must work their way through exotic locales and dungeons while battling various enemies and bosses. Players can also explore towns, interact with NPCs, collect loot and rare items and earn experience to level up their party of characters.

Final Fantasy Brave Exvius is available now for free on the Apple App Store. It does include IAPs and a timer system where you must wait or pay to energize your stamina. The game supports all devices running iOS 6.0 or later. Players who download the game before July 17 will receive a few free gifts.