iOS APP of the Week: Goat Simulator Waste of Space 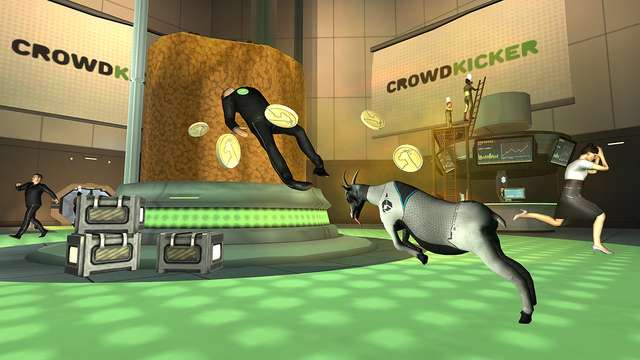 Love it or hate it, Coffee Stain Studios' App Store joke has somehow managed to spawn three sequels. The third game in the series does what all bad franchises should do by traveling to space. In Goat Simulator Waste of Space, players leave Earth after surviving the zombie apocalypze in Goat Z and after wasting money on Goat MMO Simulator. But what does a goat do in space? He crowdfunds a space colony, of course.

If you have never played a Goat Simulator title before then you should probably know that the games are purposely bad. Some people consider it a poor way to spend your money and a literal waste of space on your device. We didn't choose Waste of Space as the App of the Week because we think it is good (we didn't even play it). We chose it because Coffee Stain Studios' tenacity to keep making crappy goat simulations.

Goat Simulator is a an open-ended third-person perspective game where you control a goat. The real fun of the game is just doing stupid crap and uploading your gameplay to YouTube. Goat Simulator games are also full of hidden modifiers and easter eggs. For example, in the original you could become a demon goat, or get abducted by aliens by completing certain tasks.

Goat Simulator Waste of Space features the same crappy graphics as the original three titles, but it promises to offer the biggest map in Goat Simulator history. In the game you can collect money by headbutting humans, fly and shoot stuff, visit only one planet in an entire universe of planets, and become a bridge commander. The game also promises to include "tons of unlockable goats with special powers" and 3D printing.

Is Goat Simulator Waste of Space the epic simulation game you have been waiting for? Probably not, but it is your only chance to create a black hole with a goat, and a great way to waste your life away in your parent's basement after stealing their App Store password.

Goat Simulator Waste of Space is availble now for $4.99 on the App Store. It supports all devices running iOS 8.0 or later, including older devices like the iPhone 4s.