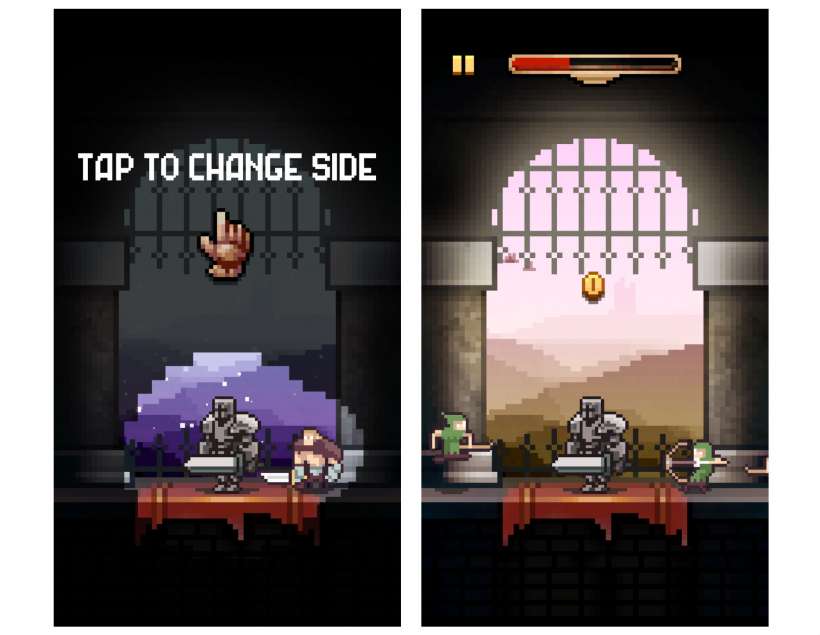 At first glance it is easy to dismiss Tap Hero as another throw away tapping title, but after a few games you will quickly become addicted. In the game you are an armoured knight who must defend himself from approaching enemies by slaughtering them with a giant sword. You swing your sword by tapping left and right as a steady stream of barbarians, archers and more charge towards you. That's the entire game. You don't move, jump or shoot. You just stand in one place slamming your sword back-and-forth as endless waves of warriors attack you.

Tap Hero may sound a bit tedious, but it is actually a well done rythm game. Each warrior has their own pace and attack that throws off your timing. As soon as you find the perfect rhythm to dispatch fast approaching barbarians some geek with a bomb swoops in to ruin your day. Swing too early and you won't have time to attack again. Swing too late and you will be rewarded with an arrow in your neck.

The game features a "Super Bar" that allows you to launch a powerful attack, and you can collect coins to purchase additional armour and weapons as you advance through the game. Tap Hero is ad supported with a $0.99 option to unlock the full game. You can also watch videos to earn bonuses, and spend real world money to increase your in-game coin rate.

Tap Hero is very hard to put down. It sucks you in with its simple but frustrating gameplay. It is also the perfect mobile title for killing time at the bus stop or doctor's office. The game includes Game Center leaderboard support and ReplayKit so you can record and share you best runs.

Tap Hero is available for free on the App Store. It supports all devices running iOS 8.1 or later.