iOS App of the Week: The Muscle Hustle 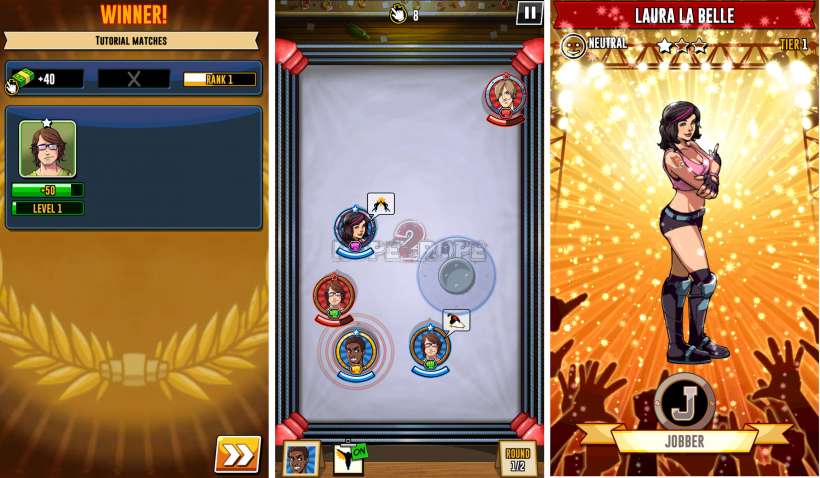 Nobody is arguing that freemium titles shouldn't have a way to make money, but games that make you wait to play are pointless and nobody likes being forced to sit through ads. Like anything else, there are both good and bad examples of freemium games on the Apple App Store, and The Muscle Hustle is an example of freemium done right.

The free wrestling game is not ad supported, and it only has timers if you're defeated. You can purchase additional in-game currency (gold) to spend on character drafts, revives, additional characters slots and tickets to special events. Basically, you can choose to grind it out or spend real world money to get some extra benefits.

You begin the game as a single rookie trying to rise in the ranks of the wrestling world. To advance you must compete in matches where you earn both experience and cash. You can then spend your cash on drafts to add more wrestlers to your rosters. The game features hundreds of wrestlers to collect and train, items to earn, and special abilities to unlock.

The matches are played in a pool or pinball style. Each of your wrestlers are represented in the ring as a circle that you can fling around to perform a variety of attacks. The gameplay is very simple, just drag your finger across your wrestler and aim the arrow where you want to direct them. You can choose to crash directly into your opponent, use the ropes or bounce off your tag-team partner to trigger a special move. Each wrestler has a different abilities, such as gaining morale when you crash into them. As you advance in the game and win more matches you can unlock signature throws, holds and aerial attacks.

The game also includes a real-time PVP league so you can test your tag-team against other players all over the world.

Muscle Hustle is available for free on the App Store.

I played this game on my Android smartphone. It's fantastic. I remember playing it a couple of years ago; This is an amazingly addictive game. The new look of the wrestlers is fabulous, loved it!