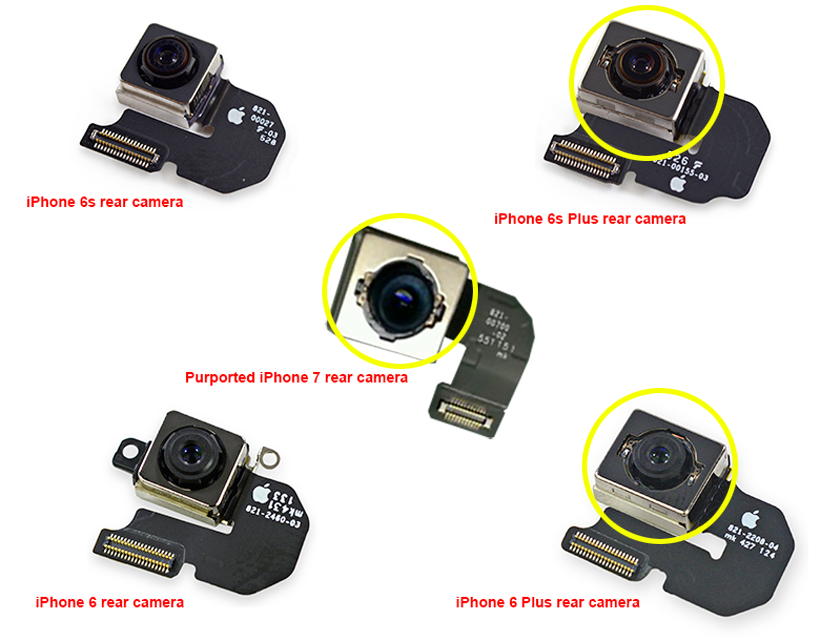 Every year Apple packs camera improvements into its new iPhone models, and this fall will be no different. The iPhone 6 Plus and iPhone 6s Plus have so far retained a monopoly on optical image stabilization (OIS), with the technology not making it to the smaller 4.7-inch iPhone 6 or 6s. This could all be set to change, if a photo revealed by none other than Nowhereelse.fr proves to be true.

Circled in yellow above, three camera modules have distinct cutouts around the rim of the camera lens apparatus. These are most noticeable on the sides of the components, and the configuration means the unit is equipped with OIS. The center camera is said to be from an upcoming iPhone 7, and clearly includes OIS technology, along with a newly redesigned ribbon cable shape.

Both of the cameras on the left side show modules lacking OIS, and these are the components found inside the 4.7-inch iPhone 6 and 6s.

The iPhone 7 Plus could also capture better photos in low light situations, or offer some type of 3D image capture through parallax. In any case, iPhone 7 buyers should be excited about OIS coming to the smaller device. OIS means image capture will be more stable, especially in low-light situations.

Announcements for the iPhone 7, iPhone 7 Plus, Apple Watch 2, and new MacBook Pro are expected at an Apple press event on September 7th.