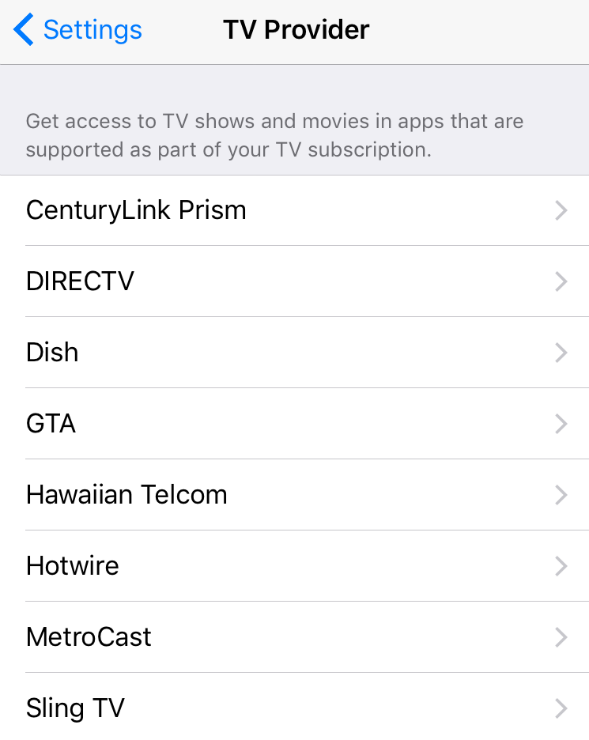 More television providers have been added to Apple's Single Sign-On in the fifth iOS 10.2 beta. CenturyLink Prism, Hawaiian Telecom, MetroCast, and GTA are now available in the new TV Provider section of the Settings app on iOS devices. The four new providers join DirecTV, Dish, Hotwire, Sling TV, who singed up to support the new feature since it was originally announced. While it is safe to assume Apple will be adding more providers in the future, some major companies, such as Comcast, are still holding out, and may eventually decide not to support the new feature at all.

Apple has been focusing on improving its television and movie streaming capabilities with the upcoming launch of tvOS 10.1 and iOS 10.2. A lot of television services offer individual apps on Apple TV and iOS devices, but they all require users to sign in individually to access each app's content. Single Sign-On allows users to authenticate only once on supported apps across multiple devices.

Apple has also introduced a new TV app to iOS devices so users can easily access all their purchased media through one hub. The new app features a Watch Now section that displays content, such as newly released television episodes, from all of your connected apps. It also includes a Library with all purchased movies and series, and a Store for making additional purchases through iTunes.

Both iOS devices and the Apple TV will be more user friendly when tvOS 10.1 and iOS 10.2 are finally launched to the general public, presumably in December. Apple today has added universal search support to both the AMC and The Hallmark Channel, bringing the overall list to around 40 supported channels in the US.

Single Sign-On and universal search are two of the new features in tvOS that finally put Apple TV on the track to be the product Apple always promised it would be. The new additions should also help holiday sales of the set-top box.

The fourth-generation Apple TV is available starting at $149 through apple.com. It ships with Apple's redesigned Siri remote, Siri support, and its own App Store for purchasing games and third party apps.