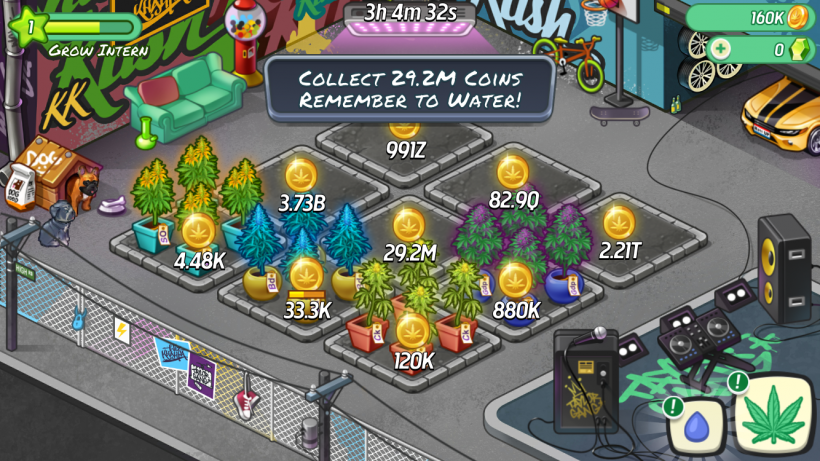 Wiz Khalifa's Weed Farm is described as a simulation game where the American rapper teaches you how to "plant, grow, and harvest the finest herb on earth." It reality Weed Farm is more of a clicker where you cultivate different types of cannabis by mindlessly tapping your display. Somehow the game has managed to earn a perfect App Store rating from over 1,000 user reviews since its release a few days ago. Not only is that a lot of reviews for a newly launched gamed, but it's a bit suspicious.

The goal of the game is to build a weed empire from the ground up. You do this by tapping your marijuana crops to tend and water them. While doing this you earn coins to spend on new types of plants and to increase production by purchasing more plots of land, various upgrades or multipliers. The strategy of the game relies on how well you spend your money to grow your business.

While some clickers can be addicting most of them get old really fast, and Weed Farm is no exception. It is not a horrible game but there isn't much to do. Most of the game revolves around just tapping plants to buy new plots. You can watch ads to earn rewards (just tap the DJ equipment), and sometimes other things happen like a drone flies by, but there isn't really much else going on in the game. The weirdest part about Weed Farm is there is zero music. There are no songs by Khalifa, nothing, just the rustling of your plants as you tap them. I checked the menu screen and there is an option to disable music. Maybe you have to unlock it? Because the lack of music makes the game kind of depressing.

I'm not sure how Wiz Khalifa's Weed Farm has earned such glowing reviews. Maybe his fans just support whatever he slaps his name on? However, it still is worth mentioning since it is one of many marijuana-themed games currently available on the normally stuffy App Store. It just goes to show how far people have come around to marijuana in the US.

Wiz Khalifa's Weed Farm is available for free on all devices running iOS 7.0 or later.